Among all the fall splendor of late, there’s been plenty of cooking and recipe testing chez moi.  I’ve got posts backed up to kingdom come and barely know where to begin.  But I’ll try. 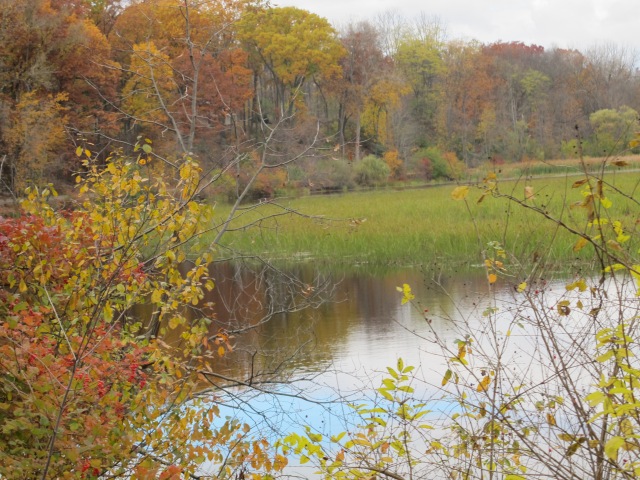 There was a trip to the Dexter Cider Mill, of course, as per tradition, followed by the requisite Beef and Cider Pot.  This time I turned it into a Shepard’s Pie (good stuff but needs a tweak or two–addition of chopped kale? diced apple?).

But is there a better view, I ask, with which to enjoy annual cider and doughnuts?

Getting there ain’t half bad either!

There was a weeknight picnic in the park. This year’s sandwich was of the grilled variety: a Brie, Prosciutto and Fig Jam one that may actually be the most splendid combination of flavors possible between grilled bread.  No explanation needed…make thee this sandwich!

And if you can eat it with a view like this, by all means, do!

There was also cooking with Barb.  We decided to recipe test one last time before her trip to London and Copenhagen (look out for a guest post!).  I served up one of my fall favorites from Nigella, Coq au Riesling, which I thought would be oh-so-apropos before her journey over the Atlantic.  I tweaked it a bit by coating the breasts in flour but next time, I think I’ll add chicken broth (and less wine) for a deeper flavor.  In the meantime, click the link, because it’s already a winner.  I served it with boiled spaetzle (I like saying spaetzle almost as much as I like eating it) and the Kitchn’s Roasted Cabbage Slaw, which I swear was absolutely better the next day.

Barb provided the Rosemary-Pecan Goat Cheese, a savory little appetizer indeed, which I swiped and took along to a Pumpkin Carving Party, along with what is sans doute one of the best anything I’ve cooked in months: Jenny’s Bon Appétit Caramelized Onion and Shallot Dip.  You know, just like the store-bought stuff we used to dip our chips in in the 70’s (didn’t we?).  Only.  Yes, only, W A Y  B E T T E R.  Have I made myself clear?  You might need this recipe right away since ’tis the season of impromptu Pumpkin Carving Parties.  Then you’ll need it for Thanksgiving, Christmas, New Years, Presidents Day…heck, I think you just might need this dip for a Tuesday. 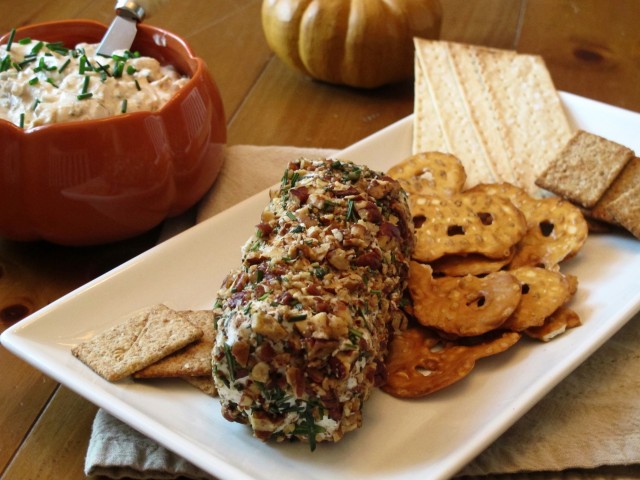 It’s that good.  And yes, Barb, one can caramelize onions by roasting them (we, in error, questioned the method). In fact, it’s easier. One can get on with other chores and check back every 15 minutes or so for stirring and scraping. 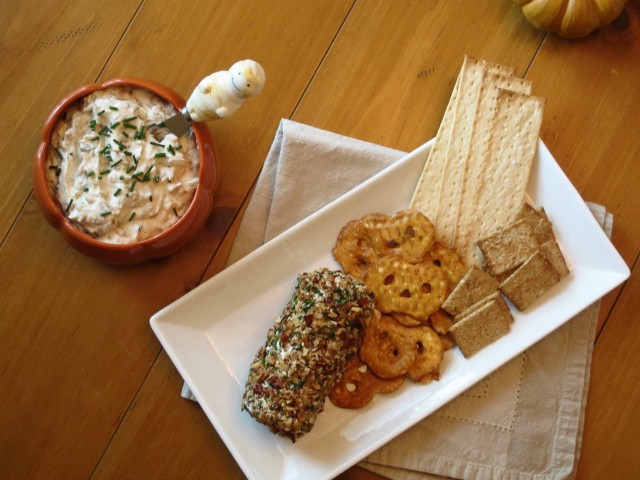 I added crushed red pepper towards the end of the caramelization process, for a little heat.  Otherwise, this is a near perfect recipe.  Don’t delay!

1. Preheat oven to 425°.  Slice onions and shallots and place in a roasting pan (or a 9 x 13 Pyrex dish).  Add the thyme sprigs.  Mix in the olive oil and season with salt and pepper.  Roast for 45-55 minutes, scraping down the sides every 10-15 minutes or so.  Add the crushed red pepper 10 minutes or so before the end of roasting.  Roast until your onions are very brown.  They’ll shrink down quite a bit.  No worries!

2. Remove the thyme sprigs (which at this point should only be the stems). Add the wine and sherry vinegar and stir.  Roast for another 15-20 minutes or until the liquid is pretty much gone.

3. Strain any leftover liquids and cool.

4.  Once cool, chop the onions and add the rest of the ingredients.  Mix well.  Taste and adjust seasonings.

This recipe is a take on a summery, herby and lemony goat cheese I do.  Barb turned it into fall flavors and now it’s one of my favorites.  Use either a small or a large goat cheese log and adjust coating accordingly.  For the larger, take 1 7 oz. goat cheese log, plain or herbed, about a 1/2 cup toasted and chopped pecans and the 3 sprigs of rosemary. Chop the rosemary and add to the chopped pecans in a bowl.  Season with salt and pepper and add about a teaspoon of olive oil. Mix and spread on a flat surface.  Roll the goat cheese log in the rosemary pecan mixture until coated. You will probably have to use your hands to press the mixture into the goat cheese.  Heat in a warm oven (about 350°) for several minutes or until the goat cheese is soft.

Serve with crackers, and do be like Barb (hostesse extraordinaire), and add some brined black olives alongside.

foodie, francophile, Ann Arborite, teacher, bookworm and self-professed latte-lover--come cook with me!
View all posts by Liza M. →
This entry was posted in appetizers, snackies, vegetarian. Bookmark the permalink.